September 10, 1977 dawned damp and grey for the citizens of Marseilles, especially those residing in Les Baumettes Prison. All the inmates (and some of the staff) were in a dark mood contemplating the rising of the sun and the fall of executioner Marcel Chevalier’s blade. Inmates of what the French called ‘Death Alley’ were equally subdued. If they were relieved that the day was someone’s and not theirs they were too tactful to show it. If they felt any guilt at hoping their door wouldn’t be opened they kept their silence.

For Hamida Djandoubi September 10 1977 was his day. Nobody involved yet knew it but he would be the last to embrace the infamous ‘Widow’ and lie between the ‘Timbers of Justice.’ It would be the last time Chevalier, descended from a long line of executioners, would perform the grim office of ‘Executioner of High Works.’

Capital punishment had been under debate in France for many years. The guillotine itself had been both a political and humanitarian statement. Egalitarian in principle, it became the only method of execution for French civilians regardless of rank and social class. No more did peasants swing limp on the rope while the axe and sword were reserved for their social betters. No longer would people be burned, broken on the wheel or hung, drawn and quartered.

When Charles-Henri Sanson debuted his new device, beheading highway robber Nicolas-Jacques Pelletier on April 25, 1792, everybody was to get a quicker, cleaner death. Hamida Djandoubi would be the last of thousands, his place in criminal history as distinct as Pelletier’s had been.

By 1977 death sentences were rare and executions even rarer. Much of the French public and their politicians had turned against capital punishment. When Chevalier inherited the job from his uncle Andre Obrecht in 1975 he worked only a few times, although his son was at Djandoubi’s execution to assist and watch should he succeed his father. Judicial death in France had long been a family affair, after all.

Executioners, disparagingly nicknamed ‘les bourreaux’ by their countrymen, occupied a contradictory place in French society. Until the execution of German serial killer Eugen Weidmann in June, 1939 the French public hadn’t minded turning out in their thousands to watch these men work, but had always despised and shunned them at the same time.

Schools refused to accept their children. In the days of regional executioners they were forced to live just outside whichever town or village they lived in. Even bakers would keep the executioner’s bread separate so their other customers would know their bread wasn’t tainted, an old French folk tale said that anything touched by the executioner was also touched by the Devil himself. Even churches refused to marry them except into the families of other executioners. By the time Chevalier became the last to perform his office all French executioners could be traced to only a handful of families, not always illustrious ones at that.

After Weidmann executions would always be performed in private within prison walls. Hamida Djandoubi’s date with ‘bourreaux’ Marcel Chevalier would be poorly-attended by official order. Times had changed since crowds turned out in their thousands to watch the bouurreaux at work.By 1977 only prison staff, lawyers and the prison Chaplain were allowed to watch the ‘National Razor’ do its work.

Not that people called Chevalier a ‘bourreaux’ much any more. In 1870 the term had been outlawed and calling anybody a ‘bourreaux’ had become a crime. The same changes also mandated that only one chief executioner be employed and required by law to reside in Paris. Overnight regional executioners lost their jobs, although some did continue as assistant executioners or ‘valets.’ Now that ‘Monsieurs de (insert town here)’ were largely out of work there was only one chief and he bore a sinister nickname;

He was ‘Monsieur de Paris.’ ‘The Man from Paris.’

It became a phrase dreaded in French prisons, especially in the cells forming ‘Death Alley.’ For a long time prisoners didn’t know their execution date until the official party came to take them from their cells. Until 5am every morning, by which time executions for the day would have been performed, every condemned prisoner dreaded the sound of a guard whispering to a colleague ‘Monsieur de Paris est arrivee.’

‘The Man from Paris has arrived.’

Who would it be, they wondered? Whose cell would be unlocked? Who would be taken away never to return, perhaps kicking and screaming on their final walk? Until 5am they didn’t know but, for at least one of them and sometimes more, between four and five in the morning was when they found out.

Would the keys rattle in their cell door..?

With no chance of a commutation or stay, Djandoubi knew his time was almost up. At around half-past four it was his turn to hear those keys rattle like a skeleton’s bones. He was told what time it was and why he had official visitors. Led away from Death Alley for the last time he was accompanied by his lawyer and ready for the final acts of his personal drama.

Djandoubi, a French-Tunisian by birth and pimp by profession, had tortured and murdered sometime girlfriend Elizabeth Bousquet. She’d refused his increasingly insistent efforts to become one of his working girls and, his harassment getting worse, she had reported him to police. As a result Djandoubi had spent 11 months in prison.

He avenged himself on her after his release in Spring 1973. After abducting Bousquet and torturing her with lit cigarettes on July 3, 1974 he’d taken her to the outskirts of Marseilles, strangled her and dumped her body. It was a brutal, squalid, utterly unnecessary murder that drew no pity from judges, jurors or anyone else with the authority to stop his execution.

Even President of France Valery Giscard D’Estaing, an avowed opponent of the death penalty, declined to intervene. Djandoubi’s plea was turned down on September 9. He would die on September 10. President D’Estaing had long professed his opposition to the death penalty although he bowed to public opinion when deciding clemency appeals. Whether he personally wanted executions made no difference. Like Jerome Carrein and Christian Ranucci before him, Djandoubi would see no mercy from D’Estaing regardless of the President’s personal feelings.

Before Djandoubi could die traditional French bureaucracy had to be observed. Paperwork had to be completed paroling the prisoner into the (very temporary) custody of Chevalier and his assistants. French law dictated that no convict could be guillotined, so Djandoubi had to be freed in order to be killed. With that done the ‘toilette du condamne’ could begin.

‘Le toilette’ was rather more practical. Djandoubi, wearing the traditional red sweater of the condemned, had his hands and feet tethered with string. He could walk, but not run or struggle. His neck was bared, the sweater cut with scissors and eased down around his arms to avoid jamming the blade. He was refused a last cigarette and pressed to drink a final glass of spirits as quickly as possible. Now, all was ready. Djandoubi’s life and that of the guillotine itself had almost finished.

The end came quickly. Standing before a door leading into the prison yard Djandoubi was held by two of Chevalier’s valets and marched quickly to his fate. He was laid face-down on ‘le bascule,’ a sliding wooden board. When the blade fell its impact would cause Djandoubi’s body to ounce from the bascule into the traditional wicker coffin beside it. A nod to the days when executions were regarded as public entertainment, the French nicknamed it the ‘family picnic basket.’

As the bascule slid him into position ‘le lunette,’ the traditional wooden collar, was quickly slipped down over the back of his neck. With everything ready Chevalier wasted no further time. One last look ensured nobody was at risk from the falling blade and Chevalier pushed a button. No photograph exists, but this image of Weidmann’s execution is very similar to what Djandoubi faced. 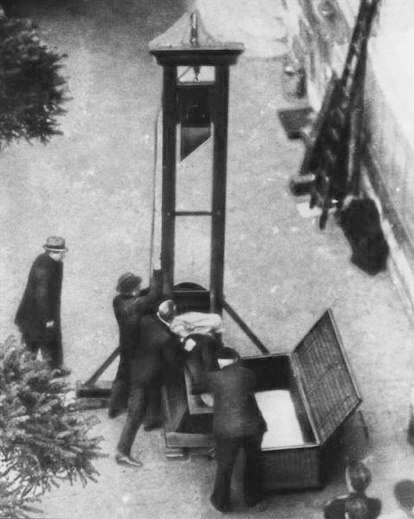 So was the death penalty. France finally abolished capital punishment in 1981 after a vote in the National Assembly. The guillotine became a museum piece (albeit an embarrassing exhibit seldom displayed in public) and Chevalier, last of ‘les bourreaux,’ was out of work. Between Djandoubi’s execution and final abolition every death sentence was respited,  the authorities seeing no point in further executions when they knew abolition was already coming.

As Djandoubi’s body, spirit and head simultaneously parted company, centuries of grim tradition died with him. Like Djandoubi and many thousands of others, ‘les bourreaux,’ the death penalty and the  ‘National Razor’ were no more.

Today, they are seldom missed.

3 Replies to “On This Day in 1977 – Hamida Djandoubi, last man to face a French guillotine.”