On This Day in 1865: The Last Stand of John Wilkes Booth 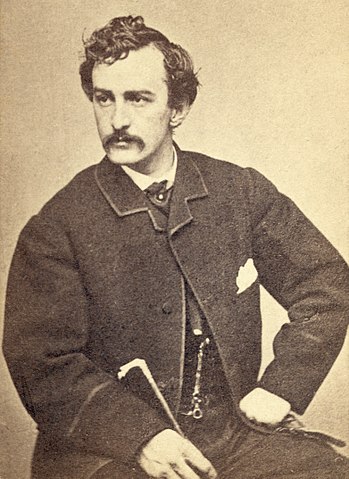 John Wilkes Booth was born into one of America’s most distinguished acting dynasties. He died one of America’s most notorious figures and its first Presidential assassin. On the evening of April 14, 1865, not long after the final surrender of Confederate forces that effectively ended the Civil War, he sneaked into Lincoln’s box at Ford’s Theater in Washington, shot President Lincoln in the back of the head with a single-shot .44 calibre Derringer pistol and made a dramatic escape by leaping from the box to the stage shouting “Sic Semper Tyrannis!” (“Thus always to tyrants!”). He’s also said to have added ‘The South is avenged!” before leaping from the box to the stage and then rushing out to a waiting horse and off into the Virginia wilderness.

The actual assassination doesn’t concern us here. What we are looking at is how he escaped after the crime, where he went and how he was finally run to earth. Booth’s assassination of President Lincoln was as futile as it was brutal. It achieved nothing other than to ruin all hope of a swift reconciliation between North and South after the war. It was reconciliation that, ironically, was one of Lincoln’s principal ambitions with the war’s end. Instead, Booth;s crime unleashed a tidal wave of anti-Confederate anger resulting in outbreaks of civil disorder, the murders of over 200 Americans across the country and a bitterness enduring for generations.

Booth himself escaped Washington with an accomplice, David Herold. His co-conspirators were swiftly rounded up. Four earned long sentences. Four more earned a date with the hangman. Booth and Herold took full advantage of the chaos caused by the first Presidential assassination in American history. They rode out into through Maryland and on into Virginia, first seeking medical help for Booth’s leg, broken during his escape from Ford’s Theater. Doctor Samuel Mudd, a Confederate sympathiser, treated Booth’s injuries. Fearing their being found in his home Mudd swiftly passed him on to Thomas Jones, also active in the Confederate underground. Mudd’s name was so blackened by his caring for Booth that it spawned the well-known saying ‘His name is Mudd.’ Mudd drew a long stretch in prison, Booth and Herold weren’t so lucky.

Booth and Herold spent days hidden in a pine thicket in a Swamp bordering the Potomac, waiting for Jones to help them escape across the river and on into the former Confederacy. Jones led them down to the riverbank in the dead of night to a boat he’d procured for them. If they’d made it their chances of being caught would have effectively vanished. Ironically, having successfully committed one of history’s most notorious assassinations, Booth’s inability to read a compass spelt disaster. He wouldn’t live to see a courtroom. If Booth and Herold had simply rowed west across the Potomac then within hours they’d have been across into the former Confederacy. In Virginia they would have been surrounded by sympathisers prepared to shelter them and help them avoid capture. Instead, disoriented and lost, they rowed north-west. Instead of crossing into Virginia and relative safety, they’d rowed all night and were still stuck in Maryland.

Realising their blunder, they bumped into three Confederate soldiers who agreed to help them into Virginia. They travelled together across the river aboard a scow near Port Conway. Unbeknown to Booth, the ferryman reported their presence to one of the many Federal patrols hunting Booth in the wake of his crime. The three Confederates were soon caught and forced to admit they’d escorted Booth and Herold to a farm owned by Richard Garrett. ‘Old Man Garrett’ had allowed them to stay in one of his tobacco barns. Thinking they were temporarily safe, they’d stayed at the barn and were totally unaware of the net tightening around them. It was there that 25 members of the 16th New York Cavalry and two detectives, Baker and Conger, surrounded them. Booth’s last stand was on. For David Herold it was a choice between surrender and death. It was just possible that a court might have shown him some mercy if he gave himself up. For Booth it was either a last stand or the hangman’s rope, Whether he surrendered or fought to the death he would be dead either way. Booth knew it.

Herold surrendered, Booth didn’t. Once Herold gave himself up Booth demanded that the cavalrymen back off 100 feet and allow him to come out shooting. This was the last thing Conger and Baker wanted. They wanted Booth alive to make an example of him. Herold would stand trial and still hang, despite his age. But it was Booth his pursuers really wanted. Having surrounded the barn they were in no mood to wait any longer. They torched the barn roof to try and burn him out and they almost succeeded.

Booth did come out of the burning building. He came out armed, but not shooting. The Spencer carbine in his right hand and the revolver in his left remained unfired. One of the cavalrymen, an Englishman named Thomas Corbett, wasn’t so restrained. As Booth staggered out through the smoke and flying embers Corbett raised his rifle and fired a single .65 calibre round straight through Booth’s neck, severing three vertebrae. The wound was almost immediately mortal.

The soldiers dragged the dying assassin clear of the burning building. Booth, barely alive and almost entirely paralysed, asked Conger to raise his hands for him. With his dying breath Booth looked at his hands and uttered his ambiguous last words:

Was he talking about his assassination of President Lincoln? Was he talking of his never having enlisted in the Confederate army, even while the war was ongoing and every man was needed? Was he talking of the war itself, a war where the industrialised, heavily-populated North held most of the cards right from the start? Only Booth knew for sure and history never will. His never having enlisted would have been a source of shame for him, given his fanatical devotion to the Confederate cause. His assassination of Lincoln was useless, given that the war was already over and Lincoln himself was a keen exponent of reconciliation between the warring factions, reconciliation rendered impossible by Booth’s having caused such bitterness and rage in the North.  So what was it that Booth thought so useless? Maybe he thought his life had been useless, and tried to give it some meaning by one desperate ac for an already-lost cause.