Crime, it’s a part of human existence. It’s in our culture, our art, our literature, our entertainment. For some of us it’s in our blood. It’s also crossed over into our language. Seemingly normal everyday phrases, the kind most people use without even thinking about their origin, can often have the darkest, most disturbing meanings. So here are some choice examples of criminal slang that even the most law-abiding citizens use all the time:

In the clink: This one’s obviously slang for going to prison. It’s an English phrase dating back to the time when all convicts were permanently shackled in manacles or made to wear the ball and chain. Think Magwitch in Charles Dickens’ ‘Great Expectations or ‘I am a Fugitive from a Chain Gang’ for this one. Being ‘in clink’ was a reference to constant noise made by convicts as their shackles, balls and chains rattled every time they so much as moved. Go into pretty much any prison museum and you’ll see examples of the manacles, the shackles and the ball-and-chain alongside the old-style convict uniforms with either stripes or arrows all over them. Metal restraints didn’t just restrict a convict’s mobility. The constant rattling and clinking as they moved made it impossible for them to move quietly, important in a time when prisons weren’t always as secure as they are now.

The third degree: This is American criminal slang, used by cops and robbers alike. Nowadays you’ll hear anybody who’s been on the wrong end of a conversation that seemed overly aggressive and confrontational saying they’ve been given the third degree. Originally, the third degree was a police interrogation involving violence or threats thereof, usually aimed at either getting a prisoner to confess to something, to provide information about their accomplices on a particular crime or otherwise make an unco-operative prisoner rediscover their sense of civic duty. Threats to see that a prisoner fell down the stairs on their way to the cells, to ensure that if they didn’t co-operate or confess their sentence would be far heavier than if they did and officers giving them a good hiding then saying they started the ruckus was standard practice, hence some American police officers nicknaming the baseball bat the ‘Alabama lie-detector.’. The ultimate in the third degree was officers demanding a confession if the prisoner didn’t want to be shot while trying to escape. 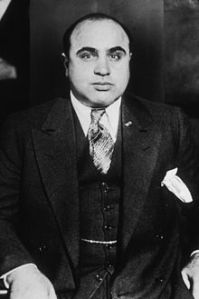 Bootleg:  Anybody familiar with Prohibition, Al Capone, the Untouchables and crime in general will have heard and used the word ‘bootleg.’ If you’re into music then you’ll certainly have heard of ‘bootleg recordings’ and might even own a few. Originally it refers to the trade between the early European settlers and Native Americans. Native Americans were forbidden access to alcohol and in Puritan settlements even those living there weren’t supposed to imbibe the demon drink. To do business with the Native Americans some European settlers would meet them and bring illegal whiskey, gin, rum and many other spirits to trade, hiding them in the legs of their high boots. It’s surprising how many fifths of Scotch you can hide in a high boot even while you’re wearing it, hence the trade was often lucrative and hard to stamp out. Prohibition existed long before the dark days when Chicago became a warzone. So did bootleggers.

Bobby: Another one from Merrie Old England, this. Every Brit and most foreigners will have heard of British beat cops being called ‘Bobbies.’ In London the tourist traps and souvenir stalls often sell plastic police helmets and miniature truncheons. But even a lot of us Brits don’t know why we call them ‘Bobbies’ even though it’s a common nickname. It’s simple. In the days before policing as we know it today, London was rife with crime until the beginnings of what we now call the Metropolitan Police. Before the Met existed there were only a few constables employed by the local magistrates and no formal police force until the arrival of the ‘Bow Street Runners.’ The Runners were founded and led by Sir Robert Peel, a senior political figure of his time and even after the Runners were replaced by the Met, the nickname stuck. Brits call British police ‘Bobbies and the Irish often call police officers ‘Peelers’ for the same reason.

On the spot: We’ve all said it, heard it or thought it. When somebody else has said or done something that’s put us in a difficult situation then it’ll be ‘They really put me on the spot’ or something similar. This is an American phrase and it does indeed refer to being put in a difficult position. In America’s gangland to put somebody ‘On the spot’ was to set them up at a particular time and place so they could be murdered. Nowadays people might complain of being put on the spot if they were blamed for somebody else’s misbehaviour or otherwise caught the rough end of a situation they maybe knew nothing about until they were angrily being blamed for something they had nothing to do with. Take heart, unjustly-maligned people everywhere, at least there wasn’t a flashily-dressed psychopath with a scarred face, bad attitude and sawn-off shotgun waiting for you when you got there.

13, Unlucky for some: This one’s so common I can’t imagine many people having never heard it before. So, why is the number 13 unlucky for some and not for others? Simple. London’s criminals knew full well that, at one time in British history, there were over 200 different crimes that could mean a trip to the gallows. Under the notorious ‘Bloody Code’ you could hang for sheep rustling or something as minor as theft of anything worth more than five shillings. While we’re on the subject of crime and punishment, London’s underworld also knew that there are traditionally 13 steps to the top of a scaffold or gallows and the traditional hangman’s knot has 13 turns of the rope. Of course, not every crook sentenced to die actually did and a lot of them managed to escape being caught at all. Hence, 13 was always only unlucky for some.

In the hot seat: From Merrie Olde England to the United States once more with this one. Americans being Americans, they’ve always been keen on progress, on new ideas and technologies. That even extends to their use of various weird (and not-so-wonderful) methods of execution. Disdaining the old-fashioned European concept of simply hanging people (not that judicial hanging is actually that simple a simple job) they found something far more modern and progressive. The electric chair AKA ‘The hot seat.’ Nowadays people refer to uncomfortable and difficult situations as being put ‘In the hot seat.’  Over 4000 American convicts might look at people complaining about a difficult job interview or press conference and think ‘My heart bleeds.’ Still, while those convicts were fried like bacon at least they can rest easy that they provided endless fodder for dime novelists and film-makers. After all, an American prison movie wouldn’t be an American prison movie without somebody being dragged from their cell through the ominous green-painted, seldom-opened door at the end of the cellblock, never to return unless, in true Hollywood fashion, the phone rings just as a black-gloved hand is reaching for a large switch.

In Limbo: When people are either describing a situation where they don’t know what’s going to happen they’ll often say things are ‘In Limbo.’ ‘Limbo’ was a nickname for the condemned cells at Newgate Prison (where the Central Criminal Court, the famous ‘Old Bailey,’ stands today. Newgate was also one of London’s ‘hanging jails’ with its own gallows. That gallows was used regularly and often for multiple inmates at a time. At the time, British law meant that condemned inmates were neither legally alive or legally dead. They weren’t legally alive after being condemned, but they weren’t legally dead because they hadn’t been hanged yet. ‘Limbo’, being a slang term for Purgatory (the transitional phase between life and death) became the nickname for the condemned cells and Newgate’s dead men walking were described as ‘In Limbo’ until they were either reprieved or taken to Tyburn to perform an entirely different form of Limbo dance.

Turned off: Nowadays when we describe something as a ‘turn off’ or say ‘I was completely turned off’ we mean that something is off-putting, unpleasant, unenjoyable, distasteful and generally something we’d rather not experience again unless we had to. All of which apply perfectly to the original form of ‘turn off.’ In the days when hanging existed, but conventional gallows hadn’t been designed yet, our ancestors had to find ways to hang people without a proper scaffold. They did, in an improvised kind of way. The prisoner would be taken to a conveniently-sited tree with a noose already tied and waiting. Then the prisoner was forced to climb a ladder before having the noose applied. At a signal, the ladder would be twisted violently so that the prisoner was literally ‘turned off’ and left to slowly choke to death. It wasn’t or another couple of centuries that anything resembling a gallows we would recognise it today was even invented. Lovely.

Pom: Australians often refer to British folk as ‘Poms’ or Pommies.’ More impolite Australians might refer to ‘whinging Poms’ if they should hear one of us complaining about something. Why do they call us ‘Poms’ or ‘Pommies’? Simple, really. The answer dates back to when Australia was a part of the British Empire and not the independent nation it is today. At the time Australia was initially used as a penal colony where Britain simply exported its convicts and left them there to live or die as best they could. To identify them as convicts (and therefore British government property) they were branded with a set of initials. Yes, that’s right, branded. With a hot iron. Forever burned into their skin were the letters ‘POHM’ short for ‘Prisoner of Her Majesty.’ Hence, today’s Australians have always referred to residents of the mother country as ‘Poms.’ Useful tip if you’re ever visiting, though, is to avoid answering any immigration officer who asks if you’ve any criminal conviction by saying ‘Didn’t know they were still compulsory.’ Just a thought.

So, there you have it. A regular Rogue’s Gallery of phrases that perfectly honest, decent law-abiding folk use every day while having no idea of their criminal origins. At least society’s low-lives have managed to contribute something to human existence, albeit unwittingly and, in some cases, terminally.