Paul Jawarski, leader of the ‘Flatheads’ gang and known as the ‘Pennsylvania Phantom.’

Meet Paul Poluszynski, alias ‘Paul Jawarski’, known throughout Pennsylvania as ‘The Phantom.’ Before the end of his extremely violent (and, some might say, mercifully brief) criminal career he claimed to have killed twenty-six people including four police officers and a payroll security guard. His gang, the ‘Flatheads’, also committed the first-ever robbery using a landmine. Criminals often use explosives to blow vehicle doors and crack safes. Blowing an entire armoured truck onto its roof and then rifling the cargo had never been done before. Jawarski and his gang were the first to do it.

Jawarski was a Polish Immigrant born some time during 1900. He died in the electric chair at the Pennsylvania State Penitentiary at Rockview on January 21, 1929 aged only 29. When he died he was also wanted in Ohio and Michigan, mainly for a string of armed robberies and multiple murder. If Pennsylvania hadn’t executed him then Ohio almost certainly would have. In Michigan he would almost certainly have spent the rest of his life behind bars.

The world’s first robbery-by-landmine happened on March 3, 1927 on Great Bethel Road outside Pittsburgh. A Brinks truck was delivering a payroll to the Pittsburgh Terminal Coal Company in Coverdale. The truck and its single escort car tended to use the same route on a regular schedule and that proved their undoing. Jawarski got the idea from the First World War. On the Western Front opposing armies used mine warfare regularly, either by burying artillery shells nose-up to destroy enemy tanks and trucks or by tunnelling under enemy trenches and burying huge explosive charges of up to 96 tons beneath their front line positions. Jawarski saw landmines as having a criminal use. Namely ambushing payroll trucks and incapacitating their escorts. It worked perfectly..

The crews of the truck and escort car didn’t expect anything out of the ordinary. They certainly didn’t expect the hundred pounds or so of industrial dynamite that erupted without warning right under their truck. Armoured trucks are enormously heavy vehicles and don’t usually end up being blown twenty feet into the air and landing upside-down. This one did. Its support car went straight into the resulting crater, leaving both vehicle crews injured, dazed and utterly disoriented but, miraculously, still alive. The ‘Flatheads’ then rifled through the truck (which had been blown wide open) and disappeared with $104,000 in cash. Criminal history had been made and mercifully nobody had died. 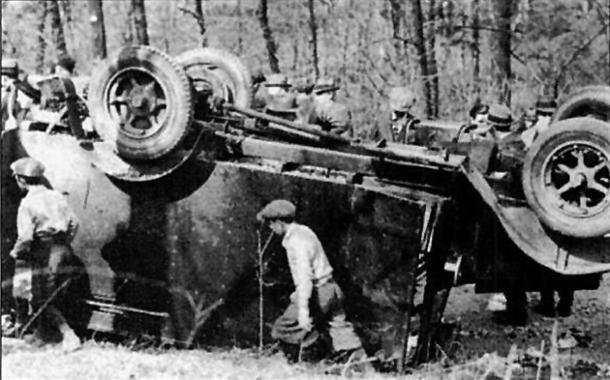 Robbery by landmine. The Brinks armoured truck Jawarski and his ‘Flatheads’ dynamited and looted of $104,000.

This was the most notable crime of his career, but it wasn’t his first or last. It was only one of a string of armed robberies and murders Jawarski committed in Pennsylvania, Ohio and Michigan. Other criminals, security guards, bystanders, suspected informers and several police officers fell before his shotgun. It was for one of them, that of payroll guard Isiah Gump on Christmas Eve, 1925 during a Pennsylvania robbery with a haul of $48,000, that saw him condemned to death. It was the Gump case that caused him to show one of his rare moments of decency. Another man, Daniel Rastelli, was convicted of Gump’s murder and sentenced to death. Jawarski contacted a lawyer and passed on a confession, freeing Rastelli but also dooming himself when he was spotted and arrested two days after the landmine robbery. Rastelli was released while ‘Jawarski’ drew thirty-to-sixty years for the landmine robbery which did little to improve his attitude toward society. Two days after his conviction for the landmine robbery he was tried again for the murder of payroll guard Ross Dennis during a robbery outside Beadling, Pennsylvania. He was condemned to death. If he managed to gain a commutation for the Dennis murder it would make no difference. He could still have been condemned for confessing to the murder of Isiaih Gump.

Pennsylvania didn’t have a formal Death Row at that time. Unlike New York’s infamous ‘Death House’ at Sing SIng Prison, Pennsylvania lodged its condemned in local institutions such as the Allegheny County Jail and transport them to the State Prison at Rockview for their date with ‘Old Sparky.’ It was at Allegheny that he was confined in a cell on ‘Murderer’s Row.’ With a bitter irony, it was the same cell previously occupied by Daniel Rastelli. Jawarski was to wait there until his appeals were denied (with his record they almost certainly would have been) and a car arrived to take him to Rockview for execution. He would eventually visit Rockview and be executed, but not yet. The Pennsylvania Phantom’ planned a disappearing act.

Allegheny County Jail. Jawarski escaped while under sentence of death.

It was in April, 1928 when the ‘Phantom’ suddenly (and violently) vanished. An outside accomplice (probably a ‘Flathead’) visited him. Security at Allegheny being somewhat lax in this instance considering Jawarski was a condemned prisoner, the staff didn’t find the guns the visitor was smuggling. One for himself, one for Jawarski and another was taken from a prison guard when the accomplice, the ‘Phantom and convicted murderer Jack Vasbinder decided to arrange their own reprieve. Having blasted their way out, the trio disappeared. Jawarski’s unofficial stay of execution wouldn’t last very long. Vasbinder’s would be even shorter.

Vasbinder, aside from being a murderer, had one other major failing. He was a hopeless drug addict and that made him a liability. If caught and going through withdrawal he might offer any and every piece of help to the authorities in return for a fix. His escape partner knew that full well and decided to solve the problem by shooting him. As Vasbinder lay dying, his killer finished the job by dumping him in the Allegheny River before moving on to Michigan and re-starting his crime spree. It was in Detroit that another career highlight presented itself. On June 6, 1928 ‘Jawarski and his new gang robbed the payroll of a newspaper, the Detroit News. They left having taken out nearly $30,000 in payroll money and also two police officers. Sergeant George Barstad had walked in on the robbery and was shot dead. Patrolman Guy Cragg was seriously wounded.

September 13, 1928 was the beginning of the end. Unknown to him, n old acquaintance had recognised him from ‘Wanted’ posters by then all over Pennsylvania and Michigan. The acquaintance alerted police who quickly responded. After a fierce gunfight and chase Jawarski was in handcuffs and seriously wounded. Patrolmen Effinger and Wieczorek were both dead from shotgun blasts. The crime spree was over and the extradition negotiations were about to start. They were unusually brief. Normally when a felon is wanted in multiple States then there’s a protracted and sometimes hostile amount of negotiation over where they eventually end up. As Jawarski had already been condemned to die in Pennsylvania, Michigan and Ohio agreed relatively quickly that Pennsylvania could have him. Perhaps as far as law enforcement in all three States were concerned, the sooner he did the ‘hot squat’ the better.

End of the line for the ‘Pennsylvania Phantom.’

They didn’t have long to wait. Jawarski knew it was hopeless. With his record trying for a commutation in Pennsylvania was a lost cause. Even if he escaped a death sentence in multiple murder charges there, he’d still be tried for murder in Ohio, also a death penalty State, or spend the rest of his days in a MIchigan prison. He ‘volunteered’ by dropping his appeals and instructing his lawyers not to make any efforts to delay the inevitable. His wish was granted. On January 20, 1929 the car and escort arrived to take him on his last ride. He remained unrepentant to the very end. During his last night he wrote a brief, scathing note to Andrew Park, the prosecutor who secured his death sentence. It read:

Shortly before he walked his last mile Paul Poluszinsky, alias Paul Jawarski, alias Paul Palmer, known to the pres and public as the ‘Pennsylvania Phantom’ was offered the spiritual advice of a Catholic priest. His last words were as blunt and forceful as his personality:

“I preached atheism since the day I quit singing in the choir. A man is yellow if he spends his life believing in nothing and then comes crawling to the Church because he is afraid his death is near.”

He didn’t believe he had a mortal soul. Judging by his carer and reputation, it’s unlikely anybody else did, either.