That is the question for any State Governor with the power to do so. Some agonise over the decision, some don’t and a great many will base their decision more on their approval rating than on justice and the law. What, as far as I’m aware, no other Governor has ever done was stand peering through a small window at a convict already strapped into an electric chair and and decided then and there whether or not to spare that convict’s life. At the electrocution of Alabama wife-murderer Samuel Hall at Kilby Prison on September 8, 1927 Governor David Bibb Graves did exactly that.

Governor Graves wasn’t squeamish about executions. During his tenure between 1926 and 1930 twenty men walked their last mile. Under Grave Alabama saw its first use of the electric chair when double murderer Horace Devaughan took his unwilling place in State history on April 8, 1927. Two weeks after him, Alabama electrocuted its first white inmate, wife murderer Virgil Murphy. Then it was the turn of murderer Clyde Batchelor. Now Samuel Hall sat in his cell, considered his chances and awaited his fate and his fate looked pretty bleak.

Hal’s sole contribution to his trial and appeals had been to resoundingly irritate all concerned by simply saying the same phrase when answering almost every question. Namely:

Despite police, the jury, the trial judge and the Alabama Board of Pardons not having the slightest doubts about his guilt, Samuel Hall still persisted in constantly denying his having beaten his wife almost to death before finally drowning her in the Autauga Creek. With no relief from the Board of Pardons and his legal issues appealed and all rejected, his only chance of survival lay in Governor Graves deciding to grant executive clemency. What Hall, the execution witnesses and Kilby Prison’s Warden and Chaplain didn’t know was whether Graves would commute Hall’s sentence or send him on his way to ‘Yellow Mama.’ Right up until the very second the switch was thrown, neither did Governor Graves.

The first anybody knew of anything out of the ordinary was when Warden Thomas Shirley received a strange order from the Governor’s office. He was told that Graves in person would attending the execution, an extremely rare occurrence in American penal history, and that Hall was to be taken to the chair and strapped down. Once he was strapped down, however, under no circumstances was Warden Shirley to throw the switch without a direct signal from Graves personally. The Warden thought it was an odd order, but continued with the customary arrangements. Hall got his last meal and his visit with the prison chaplain Reverend Brassell, the witnesses assembled, the chair was tested and despite some speculation from journalists witnessing the execution nobody was any the wiser. State Governors don’t normally attend executions, especially not of nondescript nobodies like Samuel Hall. Kilby Prison (shown below) had never had so unusual a witness, although it had seen plenty of executions.

Graves knew full well that Hall would have repeatedly been told to deny everything and keep denying it right to the end. He also knew why Hall was getting this advice, Graves’s own reputation for commuting death sentences whenever an inmate denied their guilt and kept denying it. Graves was about to take that theory to its extreme and Samuel Hall was the master of his own fate. He just never knew it. Graves’s plan was simple. As Governor he could grant executive clemency right up until the switch was thrown. Even if Warden Shirley had his hand on the switch, Graves could signal him to stop and save Samuel hall from a fate many thought he richly deserved. If Hall was marched in, strapped down and asked one last time by Reverend Brassell whether he was guilty, Graves would either commute the sentence then and there or simply nod his head at Warden Shirley. If Graves nodded, Shirley would throw the switch. And Samuel Hall would die…

The ‘Death House’ at Kilby Prison had an odd layout. Three doors opened into the actual execution chamber. One opened onto Death Row itself, through which Hall would arrive just after midnight on September 8, 1927. Another opened into a small room off to the right of the chair itself. The door to that room held a small window through which chair and inmate could be easily seen. The third door opened from that room into the switch room where Warden Shirley would be awaiting the signal. Normally that meant a white disc bearing the word ‘Ready’ would be held up in front of a small round window between the switch room and the execution chamber.. When the ‘Ready’ signal was shown, the switch was thrown. This time it would be different. Graves was in clear view of Warden Shirley and it would be Graves himself giving the signal, or not, depending on Hall’s answer to one very simple question. Was he guilty?

Alabama being Alabama, September nights are often hot, muggy, uncomfortable affairs. Being asked to stay up half the night. looking at your watch, chain-smoking and trying to pass the time before watching a man being electrocuted within feet of you probably doesn’t improve the general atmosphere, either. The speculation as to why Graves was attending in person and his strange order to Warden Shirley doubtless made already tense and difficult night for all involved even harder. Shortly before midnight the official witnesses were assembled in front of ‘Yellow Mama’ and wondering where the Governor had got to. They knew he was at the prison, but where was he? What was he doing? Why wasn’t he waiting to witness the execution?

Graves was there. As a terror-stricken Samuel Hall, so frightened that he only made it into the room with guards physically supporting him, slumped into the chair, the guards moved quickly. The straps and electrodes were fitted and tightened, everybody took a few steps away from the chair and all awaited the ‘Ready’ signal. While the rest of the witnesses stood before ‘Yellow Mama’, Graves was in the alcove behind the door, looking through the little window at Hall who was strapped, capped and ready to die. 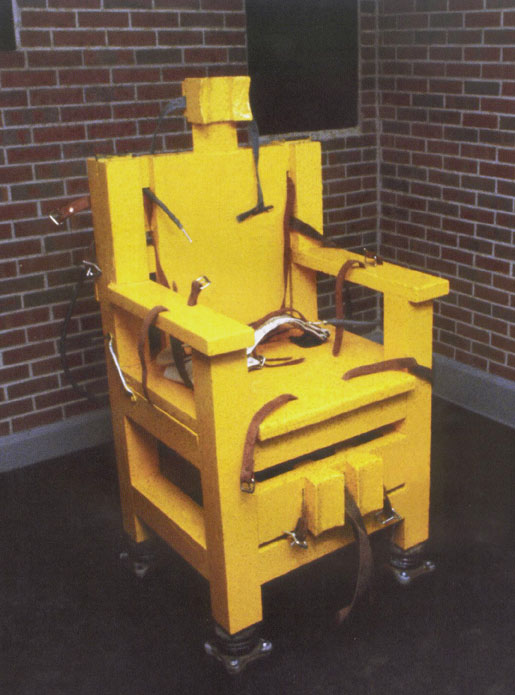 Reverend Brassell stepped forward. In a clear (if rather trembling) tone he asked Samuel Hall one simple question. Hall’s life depended on his answer. One more denial and he would live, if spending the next thirty or forty years in Kilby could be called living. If he finally admitted his guilt, Samuel Hall would die…

.Brassell waited for an answer. Graves waited, on the answer depended his signal to commute the sentence or throw the switch. Warden Shirley waited for a signal one way or the other. The witnesses waited and wondered, what was the delay..?

Brassell stepped back a safe distance. The barely-visible  at the little window turned and nodded to Warden Shirley. The switch was thrown. 2000 volts seared through Hall’s body. He died never knowing that he was one denial away from surviving a seat in ‘Yellow Mama.’

You’re probably wondering why such an unpleasant device has such a quaint nickname. Simple. The original Alabama chair was painted yellow, courtesy of paint donated by the State Highways Department whose base was directly adjacent to Kilby Prison. ‘Yellow Mama’ with a certain grim irony, was designed and built by an inmate, a British cabinet-maker named Ed Mason, then serving sixty years for burglary and grand larceny. Mason was given a temporary leave from Kilby after he installed the chair and decided never to return to Kilby and finish his sentence. Given convicts tend to dislike inmates assisting the executioner, it was probably far healthier for him that he stayed out and disappeared into obscurity..

‘His creation didn’t. ‘Yellow Mama’ stayed at Kilby and was in regular use until 1970 when Kilby was shut down. Its second home was at the Holman Correctional Facility where it remained, albeit in less regular use, until it was replaced by lethal injection. But for how long? With the current crisis over supplies of the right drugs to perform lethal injections, Alabama’s legislators are considering whether to dust off their pet museum piece and return it to active service.

But it’s far more unlikely that a State Governor in Alabama, or anywhere else for that matter, will ever again consider a clemency appeal at such close quarters.