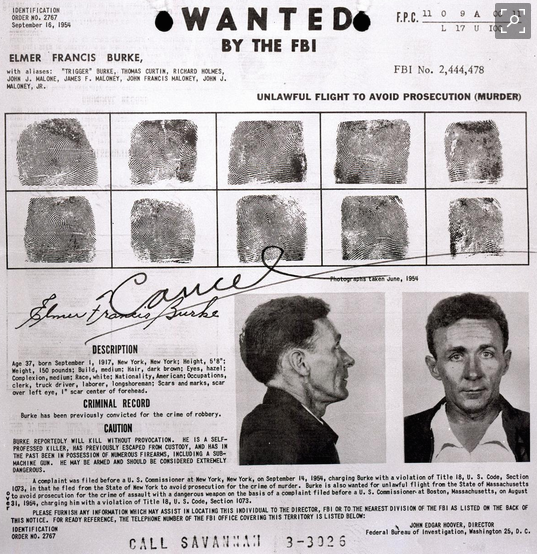 Elmer Francis Burke to be exact, AKA ‘Trigger’ or ‘Machine Gun Burke’ due to his fondness for the Tommy gun. He was also fond of the double-barrelled shotgun, habitually carrying a .45 automatic as well. An extortionist and freelance hitman-for-hire, Burke had an extensive record even before joining the US Army Rangers to get early parole in 1941. In return the army had made him an expert with a Tommy gun, Burke having seen action numerous times.

Instead of giving him discipline and sense of responsibility to others Burke’s war service only broadened his criminal repertoire. Once just another garden-variety thug extorting Manhattan shop-keepers, Burke branched out into murder-for-hire and robbery. His military training and combat experience proved as much a problem on the Eastern Seaboard as it had been an asset in wartime Europe. A veteran crook even before the war, Burke once remarked the only reason he didn’t rob police stations was that they paid by cheque.

Born in New York in 1917 he was mostly raised by his older brother Charlie. By his teens he was already in regular trouble and that didn’t improve when Charlie was murdered. At the time Burke was serving two years at Sing Sing for robbery, but prison time dulled neither his lawless nature or desire for revenge. Charlie’s killer George Goll found that out the hard way. Arrested and later released for Charlie Burke’s killing Goll soon ran into Elmer and was killed himself. Burke was 27 years old.

Burke’s violent streak was as wide as his criminal record was long. He was even roused to brutality by his own nickname. A Prohibition-era gangland killer, Fred Burke, had used the nickname ‘Killer’ and Elmer hated being called that. ‘Trigger’ was much more to his liking. It prevented his being mistaken for (and overshadowed by) his murderous namesake’s alleged role in the most famous Prohibition-era crime of all, Chicago’s legendary St. Valentine’s Day Massacre in 1929.

Assaults, extortion, robberies and at last six contract killings (probably more) left him with a lengthy file at NYPD headquarters. Ironically it was a bungled murder that really brought him to the most attention. Joseph ‘Specs’ O’Keefe had been involved the legendary Brinks robbery in Massachusetts on 17 January 1950.

$2.775 million had been taken, remaining the largest heist in US history until 1984.Claiming to have never received his cut from the robbery O’Keefe had abducted fellow Brinks robber Vincent Costa, demanding his cut as a ransom. Another gang member, Anthony Pino, paid a smaller ransom, using some of the rest to hire Burke. Burke accepted the contract.

Burke wasn’t a sophisticated killer. He liked to keep things simple; a Tommy gun or double-barrelled shotgun behind the victim’s ear being his preference. Not exactly The Day of the Jackal, granted, but a reliable murderer provided things didn’t get too complicated. The botched attempt to kill Joseph O’Keefe complicated everything.

Burke stalked O’Keefe for a while, catching up with him in Boston and botching the job as spectacularly as anyone could. He chased his intended victim for over thirty minutes, firing dozens of shots that missed before finally hitting O’Keefe in the leg. Instead of administering the hitman’s traditional ‘be-sure’ shot to O’Keefe’s head Burke, believing the job was done, stayed in Boston for some sight-seeing. It proved another disastrous move when Burke was arrested eight days later. The gang’s worst fears had arrived; While recovering in hospital O’Keefe swore out a complaint against Burke and betrayed the rest of the Brinks gang to the FBI.  Two died before their trial, another eight drew life sentences and O’Keefe himself drew four years. By then Burke was facing something far worse.

Burke should have travelled far and laid low. Not only were the police after him, his employers were also none-too-happy. They’d paid for a simple murder, not a failed attempt that only made matters worse. Instead of laying low somewhere far away Burke was recognised and arrested in Back Bay near Boston only eight days after the O’Keefe shooting. Incarcerated at Charles Street Jail, Burke promptly escaped and this time lay low for a year. It did him no good, he was again recognised while hiding out in Charlestown, Massachusetts and arrested again.

Burke returned to New York and it was another act of violence that proved his undoing. Two years earlier Burke had been dating the sister of bartender and small-time thug Edward ‘Poochy’ Walsh. Another bartender was paying Walsh for protection and when had Burke tried to shake him down on 23 July 1952 it was Walsh who (very temporarily) solved the problem.

Objecting to Burke’s trying to take one of his ‘clients’ and also to Burke continually kicking the man in the head, Walsh broke up the altercation and threw Burke out of his bar. When Burke returned shortly afterward he shot Walsh in the face in front of a roomful of witnesses. Burke had quickly fled but the law hadn’t forgotten him. Arrested again in Folly Beach, South Carolina he was brought to New York to stand trial for murder. If convicted the penalty was death unless the jury jury recommended mercy. They didn’t. Convicted and condemned, Burke was quickly on his way to Sing Sing’s death house and and a date with State Electrician Dow Hover.

Appeals proved fruitless and Governor Averell Harriman had no interest in a killer with Burke’s record. With the date set for 9 January 1958 all that remained was for Burke to sit waiting. Hover had already been booked for the job, arriving a few hours before the traditional 11pm start time on ‘Black Thursday.’ New York’s death warrants specified a particular week, not a particular day. By 1958 it was an established tradition that whenever possible Thursday was the chosen day. Occasionally a last-minute stay or temporary reprieve might see things delayed by hours or even days, but that was very rare. Thursday was Sing Sing’s preferred day for almost every condemned convict. Burke would be no exception.

By 1958 State Electrician Dow Hover was an increasingly-rare visitor to Sing Sing. His career had begun with a triple (William Draper, Maurice O’Dell and Walter Griffin on 1 July 1954) but jobs were increasingly rare as time went on. He still received invites on a regular basis but with public attitudes changing and the courts increasingly responsive to appeals, he seldom received anything else but cancellations. For a single he could expect $150 and singles were the order of the day, plus a measly eight cents per mile fuel allowance. Very occasionally he did a double, receiving an extra $50 per convict after the first one. ‘Trigger’ Burke would be one of Hover’s and New York’s last notable executions.

While Hover might have been concerned about his falling fees Burke, the star of the show, seemed anything but. He sat calmly in his cell, showing no concern as he was moved to one of the pre-execution cells in the ‘Dance Hall’ only twenty steps from the chair itself. Once lodged in the Dance Hall he would see nobody but his guards and perhaps a final visit from Warden Wilfred Denno, although Denno avoided final visits believing they only raised false hope of mercy. Like Hover, Denno was an old hand, having supervised dozens of executions before Burke’s.

All went as quietly as could be expected. Once in the Dance Hall his last meal was delivered. Burke had chosen steak and ate well, finishing off with six cigars before Denno arrived to escort him on his last mile. As the notorious ‘green door’ opened Burke entered the room smiling. He sat down as calmly as any of Sing Sing’s condemned ever had at Sing Sing, waving to reporters as the straps and electrodes were secured.

Burke liked reporters especially when they fed his considerable ego. While in the Dance Hall Burke had even spent his final hours reading and re-reading newspaper clippings compiled about himself. Now his final headline was at hand and Burke, as indifferent to his own death as he’d been to anyone else’s seemed the least nervous person there.With a slight nod Warden Denno signalled Hover and two minutes later Burke was dead. True to form Hover, always the professional, had done his job well.

O’Keefe survived Burke’s attack. After serving his time he headed West, reportedly finding work as chauffeur to Cary Grant. He died in California in 1976 aged only sixty-seven. Wilfred Denno, appointed Sing Sing’s Warden in 1950 having already served twenty-four years in the penal system, retired at the end of 1966. During his tenure Denno had supervised over sixty executions and seen the end of New York’s death penalty. He died in 2001 aged ninety-seven. Hover, long retired as State Electrician, took his own life in 1990.