1952 was a quiet year for the Sing Sing death house. Only three prisoners walked their last mile, Edward Kelly and Wallace Ford, Jr on October 30 and before them Bernard Stein on March 6. That was pretty quiet considering 1951 saw eight inmates die including Lonely Hearts Killers Raymond Fernandez and Martha Beck on March 8 of that year.

True to notoriety’s pecking order in which the most notorious inmates drew most attention, few people remember John King and Joseph Powers, killers of Detective Joseph Miccio and who died on the same night as Beck and Fernandez. When Julius and Ethel Rosenberg died on June 19, 1953 few people remembered that they were only two of six to die that year, although he Rosenbergs alone more than kept Sing Sing in the news.

Neither Ford or Kelly’s crimes were especially unusual which probably leaves you wondering why they appear here. While Ford’s crime was brutal, squalid and without any excuse or grounds for clemency (not unusual in the Sing Sing death house) Kelly was a rarity. While Ford had entered the death house never to leave it alive, this was Kelly’s second stint for the same crime.

There were 695 electrocutions in New York between William Kemmler (the world’s first on August 6, 1890) and Eddie Lee Mays (New York’s last on August 15, 1963). Initially New York had three electric chairs sited at Sing Sing, Auburn and Dannemora. Executions took place at all three until 194 when Sing Sing was designated the sole site for New York State, finally numbering 614 out of New York’s total.

There were anomalies, though. Around one inmate in three that entered the death house left alive via commutations to life imprisonment, successful appeals against their conviction or sentence or having been certified insane and sent to psychiatric institutions. With a successful appeal reversing their conviction some even left the death house and Sing Sing altogether, walking out into the bright light of freedom as though they’d never sat crossing dates of their calendar or come within days, hours or even minutes of death.

Edward Kelly was one of them. Originally condemned for the senseless murder of Eloise McHugh with a rifle (and then turning it on himself) Kelly arrived at Sing Sing on September 29, 1950. After winning his appeal and reversal of his conviction on July 1, 1951 Kelly walked out of Sing Sing on July 12 firmly believing he was one of that lucky third who’d never be coming back. He even left a warmly-worded letter for Warden Wilfred Denno, a man he never expected to see again. But we’ll be getting to that later

Suffice to say that Edward Kelly was wrong. Fatally so, in fact.

Kelly’s reversal was exactly that, a reversal and not an acquittal.  The State of New York was thus free to try him again. That Kelly had shot McHugh was in no doubt whatsoever, but the trial judge had misdirected the jury regarding Kelly’s insanity defence. According to the judge Kelly had to understand what he was doing OR that it was a crime. New York State’s appellate judges saw it differently. To be considered legally sane, they ruled, Kelly had to understand BOTH his act and the nature thereof, not one or the other. With that in mind they reversed his conviction (and his mandatory death sentence) and out he walked.

If Kelly thought he was home free, he wasn’t. With a reversal instead of an acquittal double jeopardy didn’t apply. New York State could try him again and did so, this time winning a conviction that withstood Kelly’s lawyers and their best efforts. Having walked out of Sing Sing’s death house on July 12, 1951, he walked back in on November 28 to be reunited with Warden Wilfred Denno and the death house guards Kelly’s letter had so warmly praised. In the same week as Edward Kelly began his second stint in the death house Wallace Ford, Jr arrived to begin his first (and last).

Unlike Kelly, Ford held no particular distinction. His crime, the kidnap and murder of his sister-in-law after his marriage folded, was brutal, squalid and utterly unnecessary. Hardly a rare breed among Sing Sing’s soon-to-be-dead then or now.  An argument with sister-in-law and victim Nancy Bridges over contact with his children saw Ford beat her unconscious, drive her to Genesee County. Once there he drove his car over her, reversing over her again to ensure her death. Not a man to inspire sympathy among appellate judges or the State Governor who still had the power to commute. In Ford’s case he chose not to. Convicted and condemned on November 30, 1951, he arrived at Sing Sing on December 4. 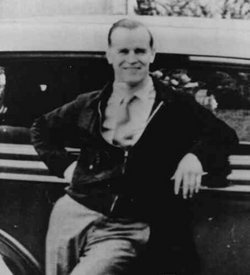 If Kelly’s case was unusual for Warden Denno it wasn’t unusual for State Electrician Joseph Francel. The fourth of five men to hold the title, Kelly and Ford would be numbers 130 and 131 of the 140 inmates he electrocuted between 1939 and 1953. After Kelly and Ford, Francel would throw the switch only nine more times before resigning in 1954.

Francel didn’t like the low pay, $150 for a single with an extra $50 per head for executing two or more prisoners in the same night. He’d also taken a dislike to the publicity surrounding his job, especially after the Rosenbergs in 1953. Kelly and Ford, however, were just another day at the office. With Ford and Kelly both out of appeals and Governor Thomas Dewey not inclined to be generous, preparations for the double event began.

12 hours before their scheduled time of 11pm Ford and Kelly were moved from their death house cells to a block of six pre-execution cells long nicknamed the Dance Hall, only 20 steps from the execution chamber itself. The execution team rehearsed, each guard knowing their particular part of the job. Francel, as was the custom, arrived in the afternoon to check the equipment and ensure it was running properly. Warden Denno had to meet and greet the official witnesses, ensuring that none had any hidden cameras as happened when Ruth Snyder was executed in 1928.

In the absence of any stays of execution, appellate rulings or executive clemency all Kelly and Ford could do was wait…

Ford had sent a letter to Judge Loughran of the New York State Court of Appeals. It did him no good, but he did cite a complaint common among condemned inmates even today;

‘My attorneys at the trial were appointed by the Genesee County Court and they also represented me on appeal before this Court. I sincerely do believe that to the limit of their knowledge, capabilities and experience, they faithfully and conscientiously did their collective best and utmost to protect my interest. However, Your Honor, they were both young men, comparatively young in the practice of law and for both my case was their first murder trial and appeal.’

As far Edward Kelly, sitting in his cell with head shaved and appeals exhausted, his own letter to Warden Denno on leaving the death house might well have come back to haunt him;

Due to the fact that I’m leaving the “Death House,” I cannot say I have any regrets, nor will I recommend it to anyone, but I can inform them that, if they are ever unfortunate enough to go to Sing Sing, they will be very well treated. I had no fault to find with anything or anybody during my stay, every reasonable request was granted. The entire staff of the prison are a credit to New York State. The officers and guards are as fine a group of men as you could find anywhere.

“Dick” and “Freddie” go about their duties as if they had a personal interest in the place, always helpful and ready with a word of cheer if needed. I enjoyed “Terry’s” homelike meals. It would certainly be a pleasure to meet everybody, including yourself, under different circumstances. I extend my best wishes to all, but I hope I never come back.

Did these words, written as Kelly walked cheerfully from death to freedom, haunt him as he made the return journey?

Francel, the fourth of five men to New York’s ‘State Electrician,’ features in my forthcoming book ‘Murders, Mysteries and Misdemeanors in New York,’ available by pre-order today and in bookstores from November 25.