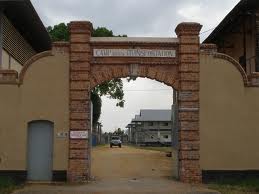 “The Bagne is a charnel house, a mass grave, running from syphilis to tuberculosis, with all the tropical diseases one can imagine (carrying malaria, ankylosis, amoebic dysentery, leprosy, etc.), all destined to work hand in hand with an Administration whose task it is to diminish the number of prisoners consigned to its care. The fiercest proponents of ‘elimination’ can rest satisfied. In Guyane, prisoners survive on the average five years – no more.” –

They called it ‘Le Bagne,’ simply ‘the jail.’ They called themselves ‘bagnards,’ simply ‘convicts.’ Inmates of probably the worst convict prison in history, some 70,000 made  their way to Guiana from France. Only around 5000 survived long enough to finish their sentences. Only around 2000 ever made the return trip. Only one in four lasted five years before dying there. In a good year around 40% of new arrivals would die within their first twelve months. In a bad year as many as 80% or even more.

On August 22, 1953 the last survivors finally returned to their native France. Some, like the legendary Paul Roussenq, would come to wish they hadn’t. As the steamer San Mateo docked in Bordeaux harbour it was a day of contrasts. On August 22, 1934 legendary gangster Al Capone had arrived at Alcatraz, an island prison from which there was supposedly no escape. On the same day in 1953, 666 inmates were returning from Devil’s Island.

There wasn’t supposed to be any escape from the Penal Administration’s clutches, either. While France had adopted the ideas of liberty, equality and fraternity there was little equality or fraternity for ‘Les Bagnards.’. As for liberty, the miserable end of former inmate Paul Roussenq summed up what liberty came to mean for many of them including the few who survived. However uncertain the future for the returnees, one thing was at least certain.

The dreaded ‘Bagne,’ site of so much cruelty, horror and death, was no more.

Their return was a break with tradition in itself. Right up until the last transport left France in 1938 convicts were gathered at Saint Martin-de-Re near La Rochelle before leaving for the Green Hell on the twice-yearly voyage. Searched, kitted out, their heads shaven, over 600 convicts at a time walked through the streets. Most were seeing their native France for the last time and that was exactly what France intended.

Henri Charriere, also known as ‘Papillon,’ described his own departure back in 1933:

“Neither prisoners, guards or public broke in on this poignant moment. Everyone understood that these men were leaving normal life behind forever.”

In 1953 Saint Martin-de-re was (and remains) an active prison. Fully occupied, those inmates aboard the San Mateo with unexpired time would be dispersed among prisons within France itself. There would be no early release for them. Even after surviving at least 15 years in history’s worst penal system France still demanded retribution. They still had time to serve and their debt to society to repay. Repay it they would.

After a century of horrors unrivalled almost anywhere the ‘Penal Administration, French Guiana’ was finally shut down. Opened in 1852 under Emperor Napoleon III, the penal colony had long been a stain on the name of France at home and abroad. Exposed by journalist Albert Londres, the scandal of the Dreyfus Affair and memoirs from former inmates like Rene Belbenoit, the shame had finally become too much to ignore.

Dreyfus, falsely convicted of treason and the victim of rampant anti-semitism, spent five years on Devil’s Island itself. Only international publicity, the campaigning of his wife and the support of luminaries like writer Emile Zola saved him from permanent incarceration. Zola’s legendary polemic ‘J’Accuse!’ still ranks among literature’s finest.

The ‘Ile Diable’ itself, though often used to describe the entire penal system, was reserved solely for political prisoners like Dreyfus. Ordinary criminals like Papillon (despite his claims to the contrary) were never sent there. Only fifty or so occupied it during the colony’s 100-year history, never more than a dozen at one time. Convicted traitor Charles Benjamin Ullmo served eight years there entirely alone apart fom the occasional guard.

Isolated from all the other prisoners, Dreyfus could only ponder his past in almost total isolation while day-dreaming of exoneration, freedom and his honour being one day restored. His suffering was inflicted through permanent solitude and endless boredom, not physical brutality:

“My days, my hours, slip by monotonously in this agonising, enervating waiting for the discovery of truth…”

Albert Londres had visited the colony in 1923, ironically welcomed by staff thinking he would be supportive. Instead his series of articles caused increased embarrassment after the Dreyfus Affair. As Londres described life in the colony;

“During this month I have seen hundreds of spectacles from Hell, and now it is the bagnards who stare back at me… Each and every day, I dream of them staring at me, imploring me…”

The appalling conditions of the colony were no secret even to those who hadn’t yet seen them. Rene Belbenoit arrived in 1933, recalling in classic memoir ‘Dry Guillotine’ his peers seeing  it for the first time. As Belbenoit walked through the main gate it finally sank in:

‘”It’s the Bagne,” said the man behind me in a voice that was devoid of all hope. “So this is where I’ll live. Until I die…”‘

Officially closed by decree on July 17, 1938 the Penal Administration remained operational for another 15 years. On November 22, 1938 despite the closure being announced the last transportees left France, most of them forever. When war broke out and France fell in 1940 it wasn’t until 1946 that the closing-down actually began.

From 1946 the Penal Administration was slowly wound down, although the state refused to assist in repatriating freed convicts wanting to return home. Instead the Salvation Army organised their repatriation in dribs and drabs whenever enough funds could be raised for their passage home. The prisons, jails and dreaded jungle camps were closed one by one. By 1953 Saint-Laurent, for a century the Penal Administration’s nerve centre, was almost a ghost town. The jungle camps like Charvein, Godebert, Crique Rouge, Cascade and others, sites of unimaginable cruelty, misery and death, were no more.

Make-work on the jungle roads nicknamed ‘Route Zero’ (it never went anywhere) and ‘Kilometre 42’ (its total length without ever reaching a destination) was over. Route Zero and Kilo 42 weren’t even meant to go anywhere, they were simply hard labour for its own sake. Guiana’s ghosts, some of them anyway, could now haunt the roadsides undisturbed. Decades later they probably know more peace in death than in life.

No more would whips crack across inmates slowly dying from forced labour, disease, malnutrition and barely any medical care. No longer would escapers die in the jungle or on the sea. No more would a bell toll as convicts were buried at sea, only to be torn apart by sharks before they reached the bottom, the sharks themselves being caught and fed to the convicts. Never again would a convict-executioner, surrounded by fellow inmates forced to kneel and watch, raise a dripping head from the guillotine’s basket and hold it high, proclaiming:

“Justice has been done…”

In 1933 Salvation Army Captain Charles Pean was sent out to organise relief efforts for the ‘liberes,’ freed convicts still struggling to survive outside prison walls. Often too sick and weak to find work (employers preferring to rent fit, healthy  convicts from the Penal Administration) they existed as best they could. They seldom survived for long, most either dying or committing new crimes in the hope of returning to the penitentiary where at least food, clothing and minimal medical care could be had.

Few could afford a passage to France at their own expense. Many more were bound by penal policy. Under the hated policy of ‘doublage’ any inmate serving less than eight years had to stay in Guiana for a time equal to their original sentence. Any prisoner serving eight years or more had to stay in Guiana forever, never again allowed to set foot on their native soil. Doublage had long been abolished for new arrivals, but for those sentenced before its abolition it still applied.

As efforts to close the penal colony had gathered steam the Salvation Army had joined the fight. Even many French administrators and officials wanted to see the Penal Administration closed down. It was too expensive to run, the costs vastly exceeded the returns and the international embarrassment had become too great. Gaston Monnerville, Guiana’s deputy in the French Parliament, was at the forefront of efforts to close the colony down. As one former penal administrator described it:

“Transportation is economically an absurdity, from the colonial point of view it is a scandal, and morally it is a crime.”

‘If the bagne I knew no longer exists, it most certainly exists elsewhere. The injustices and atrocities I saw are being duplicated at this moment in prisons everywhere. It is important to understand this because a prison is a prison, whether it is located in Saint Laurent or in Paris, on Devil’s Island or in anyplace else in the world.’

Some 300 convicts nicknamed the ‘Old Whites’ chose to stay. Their time served, they could have boarded a repatriation ship but declined. There since 1938 at the very least, they didn’t see returning to a France they no longer recognised as going home. They’d been in Guiana so long that it had become their home. The France they’d watched disappear over the horizon so many years before had vanished forever. Time and the war had seen to that. Rather than be strangers in their own land they opted to stick with what had become their norm, where life was familiar and made sense.

Doctor Roger Pradinaut was assigned to Guiana in 1965, 12 years after the penal colony finally closed its gates.  He knew many of those who stayed on, finding them a curious mix of personalities:

“The spirit of the old prisoners varied. There were some who were jokesters, others who were raconteurs telling stories about their lives. But others were much more discreet about themselves and didn’t speak much. I remember one man who was always staring into space and from time to time he cried, tears running down his face. And you could see that this was someone who had been deeply traumatised, someone who had suffered a lot, but didn’t talk about it.”

They were probably right. Many returnees drifted into insanity, alcoholism, drug abuse and crime. France was alien to them in 1953 as Guiana had been in 1938 when they arrived there. One of the most notorious, Paul Roussenq, was one of them. Roussenq, among the earliest returnees in 1946, survived only briefly. After decades in prison and miraculously surving a total of eleven years in the dreaded punishment block convicts called the ‘man-eater,’ it was freedom that finally destroyed him. Roussenq simply couldn’t adjust to life as a free man. Traumatised and ill, the once-legendary ‘Jailbird of St. Gilles’ drowned himself in the Adour River in 1949 leaving only a brief note for a friend;

‘My dear Elisee, I am at the end. At Bayonne there is a great and beautiful river and this evening I will go in search of the great remedy for all suffering: Death’

‘Les Bagnards,’ mostly sent out to die, were coming home.

One thought on “On This Day in 1953 – France’s last inmates return from Devil’s Island.”