For my 100th post, I’m going to offer you something special, something a little different from the usual fare. The story of this ‘unidentified man’ at the moment of his death.

True crime buffs and historians will have seen this particular image many, many times. Taken by photographer William van der Weyde, it’s invariably captioned as ‘An unidentified man is strapped into Sing Sing Prison’s electric chair, circa 1900.’

It was taken at Sing Sing, but it wasn’t taken in 1900. That ‘unidentified man’ can now be given a name and a story. So here it is.

The photo was part of a series published the Royal Magazine in 1898. The article describes the original Sing Sing death house, not the one readers might be more familiar with today. That wasn’t opened until 1922 and the second death house didn’t open until 1915. This is the set-up as it was in the beginning.

Sing’s Sing’s first was a quadruple on July 7, 1891. That day Harris Smiler, James Slocum, Joseph Wood and Shibaya Jugiro paid for their crimes. The last was Eddie Lee Mays on August 15, 1963. Between them, the three death houses would claim 614 of New York’s 695 electrocutions.

The ‘unidentified man’ is actually murderer Arthur Mayhew, who walked his last mile on March 12, 1897. Mayhew, convicted of murder-robbery on the testimony of accomplice John Wayne, was the 20th inmate electrocuted at Sing Sing. His crime was unremarkable as murders go, clubbing 68-year old shopkeeper William Powell on Fulton Street. His execution would also have been unexceptional, saving that he hasn’t been properly identified in over a century. Wayne, who received a 15-year sentence and so avoided execution, later retracted his testimony before reverting to blaming Mayhew.

Convicted and condemned, Mayhew found himself awaiting execution for a year. In that time Carl Feigenbaum, Louis Hermann and Charles Pustalka were taken from their cells and executed. Given the original layout of Sing Sing’s pre-death house era, Mayhew would have heard every single detail of their deaths.

As you can see, the death cells were separated from the death chamber itself by only a single door. The condemned wouldn’t actually see anything, white sheets being draped in front of their cells just before an execution, but they could hear absolutely everything.

They could hear another prisoner being led away, hear the door open and close, hear their last words (if they had any), the clunk of the switch being thrown and the hum of flowing electricity. As a final torture, they could hear the autopsy being performed, New York State law mandating an autopsy immediately after an execution. The autopsy room at Sing Sing was next door to the death chamber for convenience.

The convenience of prison staff, of course, not prison inmates. They didn’t find the clunk of the switch, the dull hum of electricity and the shrill whine of a bone saw the slightest bit convenient. In fact, it had a nasty (though unsurprising) tendency to drive them insane. When Sing Sing set its record on August 7, 1912 by electrocuting seven inmates one after another, those awaiting death created havoc. So did those whose dates were still approaching.

They were spared quite as much suffering when it was Arthur Mayhew’s turn. Mayhew, originally one of two executions scheduled that day, would have heard the other prisoner being told his sentence had been commuted and he was to be reassigned into Sing’s Sing’s general population.

With this last, most uplifting thought in his mind, Arthur Mayhew would die alone and, until now, unidentified.

His executioner, the world’s very first ‘State Electrician’ remained as close to anonymous as possible, though by his own choice. Edwin Davis was man fearful of being identified. The public knew his name and only a rough idea of what he looked like. He would journey to Sing Sing discreetly, having arranged with a railroad company  for its train to pick him up and drop him off at a spot between stations before and after an execution. He permitted no photographs and once lambasted assistant Robert Elliott (later New York’s third State Electrician) for once using his name while ordering dinner.

The layout of Sing Sing’s first death chamber was designed so official witnesses and reporters wouldn’t even see him do his deadly work. As you can see from the image below, the man in the background on the left (sometimes incorrectly identified as Davis) was actually puling a cord, not the switch. The cord was connected to Davis’s hand as he stood in the closed-off booth directly behind the chair. One pull told him to throw the switch, a second pull told him to cut the power so doctors could make their checks. If the prisoner was still alive, the cord was pulled again to order as many shocks as were needed.

Mayhew needed only the standard two jolts before dying, one to kill him and another to make absolutely sure. He was certified dead little over a minute after the cord was pulled and Davis threw the switch. As he was led into the chamber he clutched a crucifix, a fact confirmed by press reports published on March 13, the day after he died.

As he was being strapped down he uttered his final words;

“Jesus Christ, have mercy on me!”

His end, at least, was mercifully brief. Though not so brief there wasn’t time for another picture:

As Mayhew is listed by most sources as ‘unidentified,’ the first photograph of an electrocution in progress is commonly held to be that of Ruth Snyder, executed at Sing Sing in 1928. The image is widely considered one of the most important and distinctive in the history of journalism and is still used in some journalism courses for teaching purposes. It made journalistic history at the time. 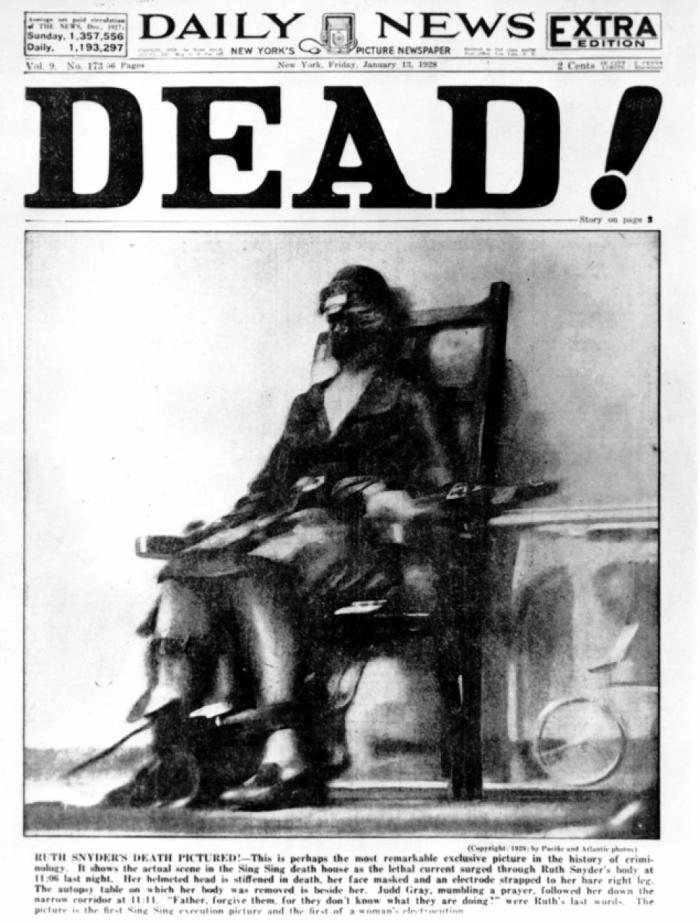 Snyder was illicitly photographed by reporter Tom Howard just after the current was turned on, using a hidden camera concealed in his trouser leg. Given that Mayhew is specifically named in the archived article in the Royal Magazine (published in 1898) and that Sing Sing records and contemporary news reports list Mayhew as having been executed on March 12, 1897, it reasonable to say that these images are of Mayhew and that the world’s first electrocution photographs were in fact taken some thirty years earlier than commonly thought.

The image also has its place in popular culture. It’s easily found online and provided the inspiration for the James Cagney film ‘Picture Snatcher.’ Curiously, while Cagney played a newspaper photographer who illicitly photographed a woman in the electric chair, probably the most famous scene of his entire career is at the end of classic ‘Angels with Dirty faces’ in which Cagney (playing gangster ‘Rocky Sullivan’) has to be dragged kicking and screaming into Sing Sing’s chair. Cagney himself never clarified whether his character was actually panicking or was feigning fear to benefit the ‘Dead End Kids,’ preferring the audience to decide for themselves.

I somehow doubt Arthur Mayhew, who always protested his innocence, would have appreciated his singular place in the chronicles of crime. Or his place as a small-time pop culture icon, either.

4 thoughts on “IDENTIFIED: ‘An unidentified man is strapped into Sing Sing’s electric chair.’”