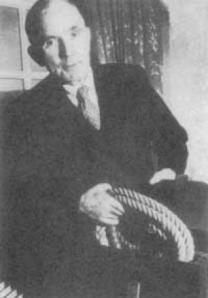 Albert Pierrepoint, King of the swingers.

.Public Executioner. It’s not what you’d call an everyday profession. Unusual? Certainly. Skilled? Absolutely. Dark and scary? Well, it depends on why you fancy the job, really. But it’s certainly not the sort of work that most people would consider a life’s ambition or the family business unless you happen to be Albert Pierrepoint. Albert really wanted the job and even wrote a school essay on how much he fancied doing it, possibly because his uncle and father were hangmen as well and he ended up working with his uncle quite a few times. Albert ended up having legally killed more people (at least 435 men and 17 women) than any half-dozen British serial killers combined and then, having ‘topped’ that many people (as he so quaintly put it) the ‘Master Hangman’ (as he so modestly called himself) had a sudden revelation that killing people to demonstrate that killing is wrong slightly failed any semblance of logic or common sense. Which was bit late for him (after 25 years in the job) and ever so slightly late for the 450 or so people that dear Albert referred to as his ‘customers’ (although the complaints department phone never rang, for some reason utterly unrelated to their all being dead). 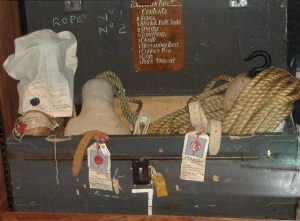 The ‘Execution Box’ containing the tools of Albert’s grisly trade.

For our diminutive death merchant (he was a little chap, only about five feet and six inches tall) stringing people up wasn’t a sordid, grim, depressing affair that most people wouldn’t touch with a bargepole. It was a skilled and potentially dangerous ‘craft’ at which he liked to excel with his speed and skill. British hangmen had an unofficial competition to hold unofficial records for the fastest and cleanest killings possible. Sort of a ‘Death Race’ if you like. Albert managed to ‘top’ his rivals (not literally) when he executed a prisoner and took only 7 seconds from start to finish. 7 seconds. Not even long enough to say ‘Good Morning, Mr. Pierrepoint’ before his latest dance partner was doing the hangman’s hornpipe before a bevy of (somewhat stunned) local dignitaries. Still, it was Albert’s job to make things go with a swing, when you think about it. 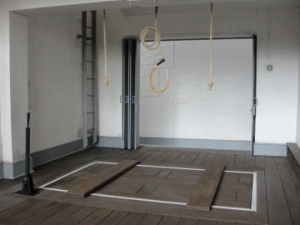 Where the bottom fell out of their world.

Albert was always somewhat irked by the miserly pay for what he considered a skilled and potentially dangerous profession. The pay for the job was, frankly, lousy. It was a small amount that was only paid half before a job and half after and if a prisoner’s sentence was commuted then the executioners weren’t paid anything at all, not even travel expenses. Albert often went from one end of the UK to another and came home penniless and that was why he quit the job in 1956, leaving the authorities to go hang, as it were. It didn’t matter to the powers-that-be that their master butcher ended up out of pocket, just as long as they saved some cash as well as saving a prisoner’s neck (literally).

You weren’t paid a thing if they didn’t have to swing.

Still, Albert’s job did have its lighter side. He owned a pub when he wasn’t travelling round the country performing his famous rope trick and it had an amusingly appropriate name all things considered. His pub was named ‘Help the Poor Struggler’, something Albert had made a career out of. It’s even said there was an appropriate sign dangling over the beer pumps, presumably for the benefit of more tardy customers, which read ‘No Hanging Round the Bar.’

Albert was a professional until the last drop.

Albert even found time to become an unwilling celebrity. He’d always kept his ‘craft’ a secret from anybody who didn’t absolutely need to know (it tends to invite a certain amount of unhealthy curiosity when you say you kill people for a living, after all). But his best efforts to stay out of the limelight ended courtesy of World War Two when it was publicly announced that he’d be popping over to Germany to perform his rope trick on over 200 Nazis. Not surprisingly in 1945 this made him a pretty popular chap all round. His amusingly-named pub did more business than ever as voyeurs turned up in droves just to look at him, get their photos taken with him, buy him pints of beer (which he kept behind the bar and sold back to other customers) and simply so they could say they’d shaken hands with the ‘Genial hangman’ as he became known.

Albert resigned in 1956 in a dispute over money. As usual, he’d been engaged to execute Thomas Bancroft, a murderer of no particular note, gone to Walton Prison at his own expense and then Bancroft was reprieved with only 12 hours to spare. Albert, tired of being stuck with travel and hotel bills, demanded that his superiors pay his expenses and they refused. So he quit as he’d rather be dropping convicts than dropping cash every time an inmate’s lawyer managed to get them off. His bosses begged and pleaded (they didn’t have anyone else who could do the job as well as Albert and you could call him ‘Top of the drops’ really) but he held firm and even refused their oh-so-kind invitation to go back on their list and continue providing cut-price carnage on their behalf. He finally turned against his former occupation (a bit late for himself and certainly far too late for 450 convicts) and later said that the death penalty achieved nothing but revenge.